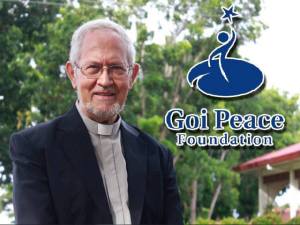 Violence, Terrorism, Kidnapping, Genocide and other sorts of chaos are happening in different parts of the world and there is only a little single dot of light that we see about peace. It’s not only that, it’s also hard to achieve even you dedicate your life in to it. Why? Because of divisions and conflicts that is caused by Power, Greed and self Interest.

Despite all these conflicts there are some individuals who are restless in promoting peace within their local and spreading it throughout the world.

One of them is our Movement Founder Fr. Sebastiano D’Ambra, Pime; he is the recipient of Goi Peace Award of 2013 along with other prominent and famous people who in their lifetime dedicate their lives and souls to attain peace through spiritual values.

It is stated that “the Goi Peace Foundation is dedicated to promoting world peace, transcending all boundaries of race, religion, or politics, with a belief that peace begins in the mind of each individual.”

Goi Peace Foundation is a non-profit organization that was established in Tokyo, Japan in 1999. It strives “to promote values, wisdom and actions for creating a culture of peace and a new civilization.”

Among the list of the recipients of the Awards was Bill Gates the Founder/Owner of Microsoft and President of Bill and Melinda Gates Foundation.

The letter announcing the award also said “Your efforts have not only advanced the process towards lasting peace in your communities, but have inspired many people around the world with your example  of true dialogue based on spiritual values.”

The award ceremony will take place during the 2013 Goi Peace Foundation Forum to be held at Nikkei Hall in Tokyo on November 27, 2013.

I am delighted and honoured to be part of the Movement even without the recognition or any acknowledgment we will still work for Peace, the Peace that starts within me and spread it throughout the entire World.